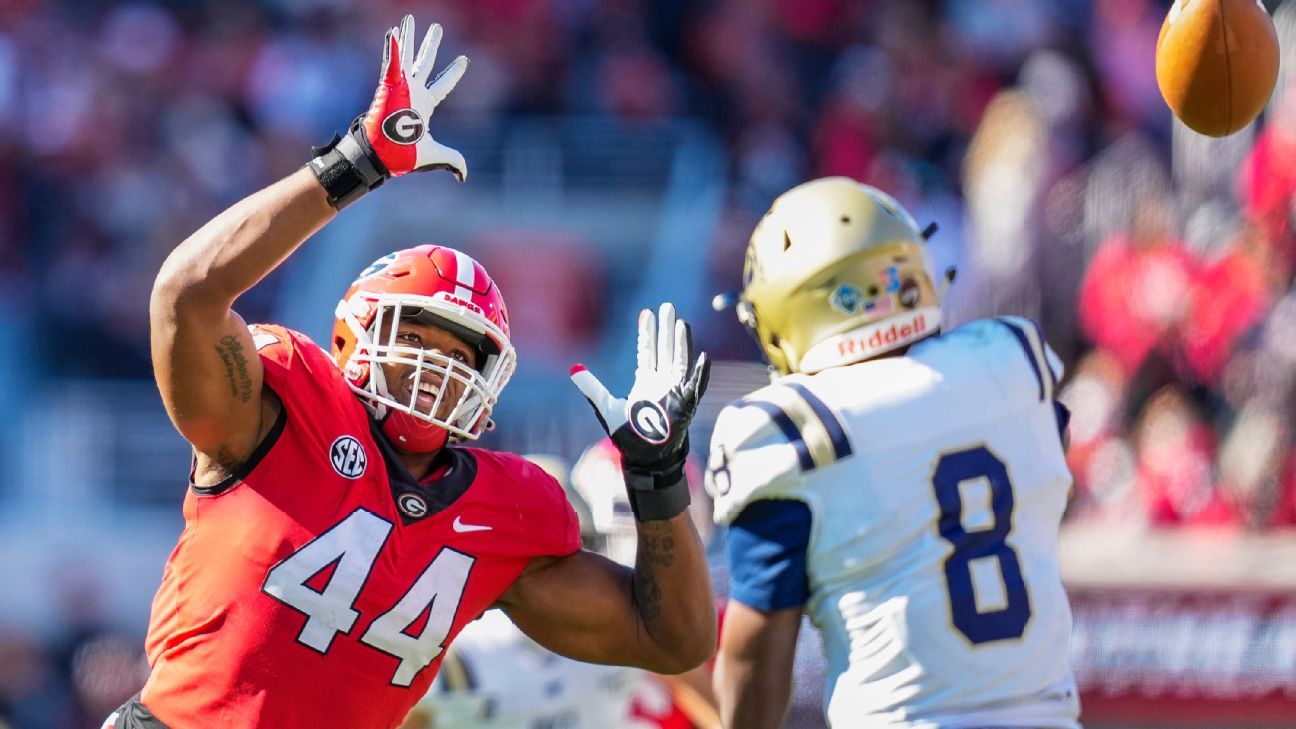 EAST RUTHERFORD, N.J. — The edge rushers at the top of the 2022 NFL draft come in all shapes and sizes with a wide range of skills. The New York Giants have a need at the position, hold the No. 5 and No. 7 overall picks and will consider several potential fits.

There is Michigan’s Aidan Hutchinson, projected by ESPN’s Mel Kiper Jr. and many other draft analysts to be the No. 1 overall pick. Hutchinson stands almost 6-foot-7, 260 pounds and has the best technique of the bunch.

Georgia’s Travon Walker (6-5, 272) is working his way up draft boards with his power and eye-catching skills for his size. His 4.51-second time in the 40-yard dash was the fastest by a 270-pound player at the combine since at least 2006. Florida State’s Jermaine Johnson II showed quick hands and feet and the production to match (11.5 sacks) as a senior. Oregon’s Kayvon Thibodeaux is not especially big for the position (6-4, 254), but has a first step that tantalizes the upside crowd.

The sheer variety of edge rushers is the beauty of the position, and this year’s draft is no different. Not everyone is Von Miller (Buffalo Bills) or Myles Garrett (Cleveland Browns), the pass-rushing prototypes who most anyone could scout and predict their greatness. It’s a position where seemingly flawed prospects such as 2021 NFL defensive player of the year T.J. Watt of the Pittsburgh Steelers, who was considered an effort rusher and selected 30th overall in 2017, continuously prove the evaluations wrong.

So where does it all go bad? What is non-negotiable when scouting edge rushers and determining what really makes them effective getting to the quarterback at the next level?

“If you start focusing on just the measurables and you try to create something, sometimes you can get yourself in trouble,” Atlanta Falcons general manager Terry Fontenot said at the NFL scouting combine. “I always say the most important part is: Is he winning those 1-on-1 matchups?”

This is what the Giants and general manager Joe Schoen must figure out. Which of this year’s top edge rushers won consistently at the college level and will it translate to the NFL game? Are they worth the No. 5 or No. 7 overall pick?

The Giants, who who haven’t addressed the position in the top 10 since selecting Cedric Jones in 1996, are just one of the teams in the market for an edge rusher at the top of the draft. The teams with the top four picks — the Jacksonville Jaguars, Detroit Lions, Houston Texans and New York Jets — also have needs at the position.

Hutchinson, Walker, Johnson and Thibodeaux all have visited the Giants or will be visiting them prior to the draft, according to sources. It’s a position they must address even after selecting Azeez Ojulari out of Georgia in the second round last year. He had 8.0 sacks as a rookie.

“We have enough needs on the roster to take the best player available,” Schoen said recently of the two high picks. “That is how we’re going to set [the draft board]. We’re going to set it best football player 1-7.”

Schoen was part of a front office that drafted edge rushers Greg Rousseau and AJ Epenesa with Buffalo’s top picks each of the previous two years. Neither was a workout warrior, but both were long and productive coming out of college.

Length could be a preferred attribute for the Giants with defensive coordinator “Don” Wink Martindale coming from the Baltimore Ravens and bringing his 3-4 defensive scheme that favors long outside linebackers. Walker (35.5-inch arms) and Johnson (34 inches) have that working in their favor.

Hutchinson (14.0 sacks) and Johnson have the production, which is still the No. 1 non-negotiable on the wish list of many evaluators.

“Legitimate production, where you watch the film and this guy is really affecting the quarterback because he’s doing it,” former Giants draft boss and current NFL Network analyst Marc Ross said of what he looks for in edge rushers. “Not through scheme. Not through cleanup. Sacks. Not through garbage sacks, but this guy is legitimately affecting the quarterback consistently based on how he plays and his talent and ability.”

Ross brought up George Selvie, who played alongside Jason Pierre-Paul at South Florida. Selvie had 14.5 sacks his sophomore year and Pierre-Paul had 6.5 in his only season at USF. But the film showed that a lot of Selvie’s sacks were hollow. Pierre-Paul, meanwhile, was affecting the quarterback constantly despite his modest sack total.

The Giants and Ross drafted Pierre-Paul 15th overall in the first round of that 2010 draft. Pierre-Paul went on to become an All Pro who helped New York win a Super Bowl in his second season. Selvie, who finished his career with the Giants, was drafted in the seventh round and had 14 sacks in six NFL seasons.

So perhaps more important than collegiate sacks are pressures. There does appear to be a correlation between edge pressure from college to the pros in recent years. Thibodeaux has the highest pressure rate (15%) of the four pass-rushers projected by Kiper to be selected the highest. He was followed by Hutchinson, Johnson and Walker in pressure rate.

This is, in my view, quite concerning for Travon Walker — who had just an 8% pressure rate in college.

Here’s where he, Hutchinson, Thibodeaux and Bonitto (!) stand on the x axis of this chart. pic.twitter.com/NVrN70TJhe

But analytics alone can’t show the full picture for edge rushers. There are other boxes that must be checked.

“My one thing that is pretty [firm], if you don’t have an element of power in the National Football League, then people are just going to be able to set you soft,” one NFC executive said. “And you have to be a really good athlete then if you don’t have power.”

The executive brought up Carolina Panthers edge rusher Brian Burns as an example of the occasional outlier. He considers him among the rare class of players who can survive without that true power because of his short-area quickness.

Burns, who ran a 4.53 in the 40-yard dash and had a 10-foot, 9-inch broad jump, has 25.5 sacks in his first three NFL seasons. It was obvious in the athletic testing that his skills might translate.

The evaluator thinks the same should be the case with Thibodeaux. He was banged up this past season but still produced. He had 7.0 sacks and a 17.8% pressure percentage despite playing just 10 games and dealing with an ankle injury.

In Thibodeaux’s case, the athletic testing matches the on-field product. But it’s rarely that easy. It’s not simply a size, speed and weight position. Multiple evaluators said they aren’t going to simply eliminate edge rushers based on a slow 40-yard dash. There is too much that goes into the position: Hand usage. Power. Moves. Counter Moves. Get-off. Leverage. Technique. Not all of it can be measured while running and jumping in shorts at the combine.

“You want [confirmation in athletic testing], but it’s not a must,” Ross said. “What are you seeing on film? It was the Terrell Suggs lesson. You watched him on tape and there was a guy that legitimately got after it non-stop. Looked explosive as can be on film. And then he goes out and runs a 5.0 flat [in the 40-yard dash]. Well, this guy can’t play anymore. What!?”

Not that anyone in this year’s top crop falls into that category. Hutchinson ran a more than respectable 10-yard split of 1.62 seconds. The other three ran 4.58 seconds or better in the 40-yard dash.

It’s what makes this a strong group of edge rushers at the top of the draft. And it gives Schoen and the Giants quality options to fill what has become a longstanding void — assuming one they like is available when they are on the clock.

Packers (Photo by Patrick McDermott/Getty Images) The Packers’ offense was listless in Week 1 at Minnesota. Here are five bold predictions on how things will go this week for Green Bay.  One loss hasn’t sent everyone in Green Bay into a full-blown panic, but the team’s ugly effort against the…

On Sunday, Chiefs defensive tackle Chris Jones drew a flag for “disturbing language” against Colts quarterback Matt Ryan, yet what was said is unclear. With just a few minutes left in the fourth quarter, the Chiefs-Colts game was 17-13. The Colts embarked on what would be a game-winning touchdown drive,…