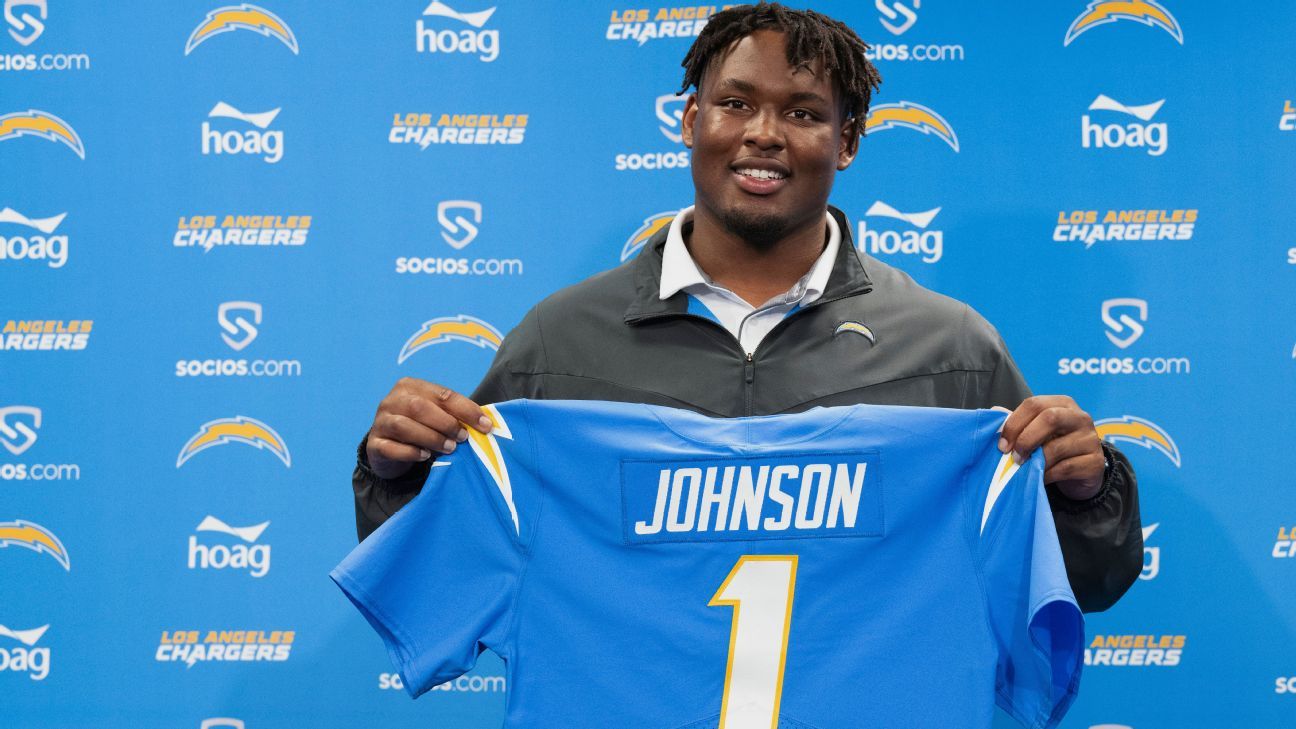 COSTA MESA, Calif. — The Los Angeles Chargers commanded attention at the outset of the offseason.

They acquired All-Pro outside linebacker Khalil Mack from the Chicago Bears in exchange for a second-round pick this year and a 2023 sixth-round pick. Then the Bolts signed Pro Bowl cornerback J.C. Jackson to a whopping five-year, $82.5 million contract in free agency.

But a star-studded streak of activity came to a halt on the opening night of the NFL draft when the Chargers used their first-round pick, No. 17 overall, to select a guard.

“Guards are people too, right?” Tom Telesco asked, grinning, in a rhetorical question following the opening round of his 10th NFL draft as Chargers general manager.

After making the high-profile initial offseason moves to improve a defense that ranked No. 29 in the NFL last season and allowed an average of 27 points per game, the Chargers selected Boston College guard Zion Johnson with their first pick in the draft, prioritizing protection for third-year quarterback Justin Herbert and a need to keep their offense moving.

“I know it’s not the sexiest pick in the world, but he’s tough, he’s durable, he’s smart,” Telesco said about Johnson, who is anticipated to step in immediately at right guard. “We have some excellent skill players, both at receiver, tight end, also at running back and with Justin Herbert.

“Obviously, these guys cannot do their jobs without a rock-solid offensive line. As much as this pick is to protect our quarterback, which is a big part of it, this is also to facilitate everybody else. It’s pass protection, it’s run game.”

It’s not just that the Chargers’ first pick wasn’t that exciting, their entire draft didn’t warrant headlines. And it also didn’t yield the exact results for which the general manager hoped.

“It never goes perfect, because you can’t control everything,” Telesco said. “But it was a good weekend of work.”

However, in a season with playoff expectations after a near-miss in 2021 extended a three-year postseason drought, the Bolts were able to quietly address several areas of need, including the offensive and defensive lines, running back and the secondary.

“From the last game that we played ’til now, we’re certainly a much different-looking football team,” said Brandon Staley, whose first season as coach resulted in a 9-8 record and third-place AFC West finish. “There’s a lot of time between now and when we play, so we’re always going to be trying to find that winning edge, but I really like the team we have in front of us now.”

The Bolts selected eight players after entering the three-day event with 10 total picks. Two of their picks, both seventh-round selections, ended up with the Bears, as the Chargers traded them to re-acquire the 2023 sixth-round pick they sent to Chicago as part of the Mack trade.

The Chargers selected guard Jamaree Salyer in the sixth round to join Johnson on the offensive line. The Georgia product has experience playing all five positions on the line, and although he said some teams projected him as a right tackle, the Chargers have penciled him in as an interior player.

“He has a great makeup, great attitude to come in and try and win a job,” Telesco said about the NCAA national champion.

The Bolts used a fourth-round pick on Texas A&M running back Isaiah Spiller, whose rushing and pass-catching abilities are expected to complement Austin Ekeler. Staley said safety Derwin James Jr. vouched for Spiller “in a big way” as another former player of coach Jimbo Fisher, who coached James at Florida State and Spiller at A&M.

“[James] was saying, ‘You know that if you can play all three downs for Jimbo that you’re a legit guy,'” Staley explained. “He has really good instincts.”

Spiller led the SEC in rushing yards since 2019, which includes a conference-best 1,844 rushing yards after contact in that span.

The Chargers also added Purdue fullback Zander Horvath in the seventh round.

Defensively, the Bolts built depth in their secondary by selecting Baylor safety JT Woods in the third round.

“He’s a safety with a lot of cover ability, with his length and his speed,” Telesco said. “He shows a little bit of corner movement, so we kind of see him as a defensive back.”

The Chargers also drafted UCLA defensive tackle Otito Ogbonnia in the fifth round to join a defensive front that already has undergone a significant makeover with the addition of defensive tackles Sebastian Joseph-Day and Austin Johnson in free agency. Like Ogbonnia, Joseph-Day doesn’t have to travel far, as he was with the Super Bowl champion Los Angeles Rams last season.

“We look at lot closer to what I expect to look like,” Staley said about the interior of the defensive line. “We’re not there yet, but we’re a lot closer.”

Some questions remain as the Chargers continue the offseason program and look ahead to training camp.

Despite adding two offensive linemen, there remains no clear starter at right tackle. Storm Norton and Trey Pipkins III will again be among candidates to fill the spot.

And depth continues to be a concern on the edge behind Mack, Joey Bosa and second-year man Chris Rumph II.

“To kind of fill out the depth of that position, we’re going to have to look elsewhere,” Staley said. “Whether it’s the undrafted free agency right now or veteran free agency or before the first game — sometime during training camp — that’ll probably happen at one of those three junctures.”

As Staley prepared to exit his post-draft news conference, he provided a reminder the work is ongoing.

“Today is an ending, tomorrow is a beginning,” he said.

But if all goes as planned, each phase will play its part in making the Chargers relevant again come late January.

Julian Edelman and Martellus Bennett have fired shots at Jimmy Garoppolo for not playing through an injury early in 2016 with the New England Patriots. Jimmy Garoppolo cannot catch a break recently. Despite leading the San Francisco 49ers to two of the last three NFC Championship Games, he’s expected to…

Washington Commanders quarterback Carson Wentz. (Jerome Miron-USA TODAY Sports) Nothing weighs down teams quite like subpar NFL quarterbacks. In Week 4, even winning performances were not good enough to spare these QBs from criticism. In the NFL, you’re only as good as your last outing. It doesn’t matter if you…

The New York Jets want to attract Aaron Rodgers, and just like the Broncos before them, have hired his good friend Nathaniel Hackett. The best decision Nathaniel Hackett ever made was befriending Aaron Rodgers. It has landed him two high-profile jobs, the first of which had a lucrative buyout thanks…