In the recently released 2021-2022 freedom of expression report, UNESCO noted the deaths of 86 journalists last year, amounting to one every four days, up from 55 killings in 2021.

The findings highlight the grave risks and vulnerabilities that journalists continue to face in the course of their work, the agency said.

“Authorities must step up their efforts to stop these crimes and ensure their perpetrators are punished because indifference is a major factor in this climate of violence,” said UNESCO Director-General Audrey Azoulay, describing the findings as “alarming”.

UNESCO noted that nearly half of the journalists killed were targeted while off duty; some were attacked while travelling, or in parking lots or other public places where they were not on assignment, while others were in their homes at the time of their killing.

The report warned that this implies that “there are no safe spaces for journalists, even in their spare time”.

Despite progress in the past five years, the rate of impunity for journalist killings remains “shockingly high” at 86 per cent. Combating impunity remains a pressing commitment on which international cooperation must be further mobilized, the organization said.

In addition to killing, journalists in 2022 also were victims of other forms of violence. This included enforced disappearance, kidnapping, arbitrary detention, legal harassment and digital violence, with women particularly being targeted.

The UNESCO study highlighted challenges for journalists, pointing out that the weaponization of defamation laws, cyber laws, and anti “fake news” legislation, are being used as a means of limiting freedom of speech and creating a toxic environment for journalists to operate in.

UNESCO found that Latin America and the Caribbean were the deadliest for journalists in 2022 with 44 killings, over half of all of those killed worldwide.

Worldwide, the deadliest individual countries were Mexico, with 19 killings, Ukraine with 10 and Haiti with nine. Asia and the Pacific registered 16 killings, while 11 were killed in Eastern Europe.

While the number of journalists killed in countries in conflict rose to 23 in 2022, compared with 20 the previous year, the global increase was primarily driven by killings in non-conflict countries. This number almost doubled from 35 cases in 2021 to 61 in 2022, representing three-quarters of all killings last year.

Some of the reasons why the journalists were killed were due to reprisals for their reporting on organized crime, armed conflict or the rise of extremism. Others were killed for covering sensitive topics such as corruption, environmental crime, abuse of power and protests. UTHAI SAWAN, Thailand — Thai police are investigating a report that a CNN crew inappropriately entered the day care center while reporting on the aftermath of the massacre in the building that left more than 20 preschoolers dead, authorities said Sunday. Danaichok Boonsom, head of the local township administration, told…

UN News: The Russian war in Ukraine has reached a tragic milestone. Are there any hopes that this war will end anytime soon? Amin Awad: “There is optimism that the war will end, because neither Ukraine nor Russia can afford it. Ukraine is suffering from the loss of life, the destruction…

Mr. Bialiatski, a veteran rights campaigner and founder of Viasna (or “spring”) civil society group, was arrested in July 2021 on tax evasion charges, along with two other activists, and reportedly held in dreadful conditions in a prison in Minsk. Their trial began on Thursday. “We are gravely concerned by…

The non-binding document, known as The Delhi Declaration on countering the use of new and emerging technologies for terrorist purposes was adopted in the Indian capital on Saturday, following a series of panels that involved Member States representatives, UN officials, civil society entities, the private sector, and researchers.  The declaration… 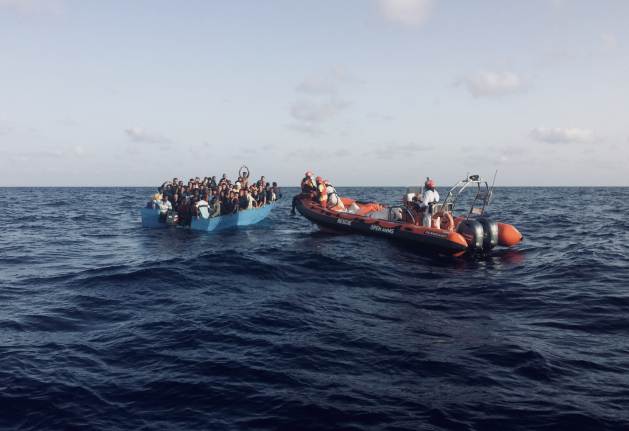 Migrants somewhere in the central Mediterranean are contacted by the Open Arms crew. Credit: Karlos Zurutuza / IPS by Karlos Zurutuza (barcelona) Tuesday, December 13, 2022 Inter Press Service BARCELONA, Dec 13 (IPS) – It was a hellish journey aboard a crammed boat amid three-meter waves. It had started on a…