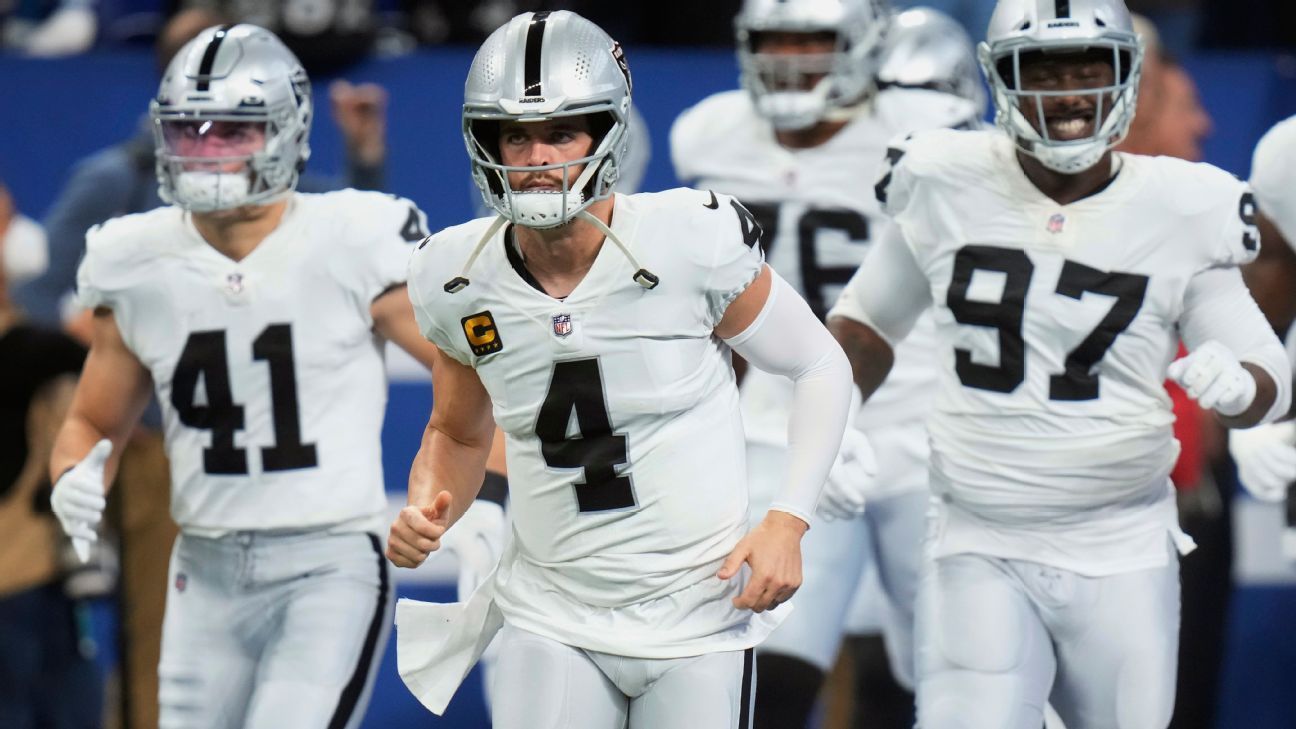 A trusted playmaker who might be the best receiver in the NFL?

A contract extension that makes sure you are paid at market value and gives you comfort and commitment?

You better believe it.

It’s been a wild and, well, fulfilling offseason thus far for Las Vegas Raiders quarterback Derek Carr, who has gained the services of Josh McDaniels as his head coach, Davante Adams at wideout and, yes, that three-year, $121.5 million extension Wednesday. All of which brings up a familiar refrain …

Not that Carr himself has ever gone public with an excuse, mind you, it’s just … they have always been baked into his Raiders career.

Stop us when we’re lying.

What you need to know about the Las Vegas Raiders:

From fractured bones in his pinky, leg and back, to broken relationships with wideouts such as Michael Crabtree, Amari Cooper and Antonio Brown, to whatever that was that went down near Washington, D.C., at the height of the protests during the national anthem, to team rebuild after team rebuild, to a leaky offensive line, to an oft-generous defense, to Jon Gruden’s emails, to Henry Ruggs III‘s fatal car crash and subsequent release.

Now? Carr — whose $40.5 million new money average per year in the extension places him fifth among quarterbacks, behind the Green Bay Packers‘ Aaron Rodgers ($50.2 million-plus), the Cleveland Browns‘ Deshaun Watson ($46 million), the Kansas City Chiefs‘ Patrick Mahomes ($45 million) and the Buffalo Bills‘ Josh Allen ($43 million) — has everything he could have ever asked for in this (professional) life.

And the Raiders, who have privately grumbled about the checkdowns, fourth-down throwaways and turnovers as much as they have celebrated Carr’s 24 comeback wins over his eight-year career, have essentially given themselves a four-year window to win a Super Bowl.

A game they haven’t played in since the 2002 season. One they have not won since 1984, when Ronald Reagan was president.

Carr also reiterated that he only wanted to be a Raider and he was “crazy enough” to be willing to play out the final year of his deal this season sans extension.

“I told my agent, ‘I’m either going to be a Raider, or I’m going to be playing golf. I don’t want to play anywhere else,'” he said. “That’s how much this place means to me.

“I hope people can hear my heart on that, that I was dead serious when I [said] that. I had one year left on my contract; if it was one year, it was going to be one year. Thankfully it will be four more. Hopefully we can build on that, I can finish and just do what I set out to do nine years ago. And that was to win a championship.”

Carr, who turned 31 last month, owns virtually every passing record in franchise history … but has a career record of just 57-70 — the 70 losses are the most by a quarterback in his first eight seasons and is already tied with Jeff George for most by a QB in his first nine — and is 0-1 in the postseason.

The 26-19 loss in the wild-card round at the eventual AFC champion Cincinnati Bengals in January was a microcosm of his career. He led the Raiders to the precipice of a score, kept his team competitive with a first-and-goal at the 9-yard line before he spiked the ball on first down (the Raiders wanted him to run a play with the clock running), never looked tight end Darren Waller‘s way in the series and threw an interception on fourth down short of the end zone with 12 seconds to play.

Then again, Las Vegas would not have been in such a position without Carr’s late-game heroics, as he helped lead the Raiders to an NFL record six walk-off victories in 2021.

Carr reflected on being passed over in the first round eight years ago and landing with the Raiders, who then called Oakland home.

“I don’t know why, but I just wanted to go there,” he said. “I was like, I want to be a part of fixing that. I want to be part of helping get them back to the playoffs and be a winning franchise again.

“We’ve proven it in spurts, but I think it’s time we just do it more consistently … we’re in the middle of what I dreamed of doing. I wanted to be someone, when all was said and done, my name would be at the top of a lot of lists on some stats sheets. And then I wanted to hold trophies. We haven’t done some of those things yet, but I wanted to leave my mark on this organization. I’ve got four more years for that opportunity. That’s exciting for me.”

Such is the polarizing factor of Carr within Raider Nation, which either loves or loathes him. And that fan base will have another four years to get into and sort through its feelings.

Antonio Brown released a statement on social media concerning his biggest regret and the former NFL wide receiver delivered a truly wild take.  The last image that former All-Pro wide receiver Antonio Brown left NFL fans with was him ripping off his pads and shirts on the sidelines in New…

Patrick Mahomes revealed an absolutely legendary story about how he ended up being drafted by the Kansas City Chiefs that does a lot of work rebuilding Matt Nagy’s reputation.  Like hash marks between the down-and-distance, nuance is what makes the NFL more than just a game. Hearing anecdotes about this…

Arizona is in jeopardy of losing Super Bowl LVII to another state due to controversial policies from gubernatorial candidate Kari Lake. As Election Day looms on the horizon, the NFL finds itself in a tug of war with Arizona’s Republican gubernatorial nominee, Kari Lake. In recent interviews, Lake stated “I…

Cleveland Browns running back Nick Chubb said he doesn’t “know what to expect” from former teammate and Carolina Panthers quarterback Baker Mayfield ahead of Week 1 game. When looking at the Week 1 schedule for the 2022 season, one of the more intriguing matchups based off drama will be between…